Here it is! The final episode of Nemesis! I am forever indebted to

hoshizora20 for her incredible help with QC throughout this entire drama, I could not have done it without her! Reminder to check out her still on going project, Tantei Hoshikamo!

Soft subs are as always timed to chesutosakurai's web-dl raw, hard subs are up for everyone who wanted them too. It's been a wonderful journey subbing this drama, and I'm honestly sad to see it end! But I will be going back over every episode and touching up the subs, and once that's finished I will post a masterpost for the whole series, and member lock these posts. Until then, enjoy~! 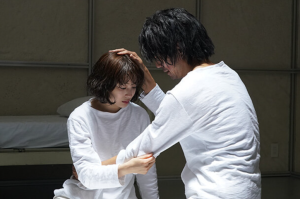 Nemesis Episode 10 - "Thank You for Loving Me"

chesutosakurai
✖ Do not reupload anywhere and do not claim as your own work.
✖ Do not retranslate these subtitles without permission.
↳ Feedback is always welcomed! Please let me know if there's any issues :)

Some translation notes:
[Spoiler (click to open)]
- Like mentioned before, Saitama is quite a way away from Yokohama, where Nemesis is based.
- Pentobarbital is a sedative often used on animals, which can shut down the entire body in just a few minutes.

Episode 10 "Thank You for Loving Me" Synopsis:
[Spoiler (click to open)]
The Nemesis Detective Agency’s detective Kazama Naoki (Sakurai Sho) and company boss Kurita Kazuaki (Eguchi Yosuke) discover that Kan Research Institute, aka Kan Lab’s great mastermind is Kan Tomomi (Hashimoto Kanna). In order to rescue Mikami Anna (Hirose Suzu) and her father Hajime (Nakamura Toru) after being kidnapped and held hostage by Tomomi and Yamato Takeru (Ishiguro Ken), Kazama reveals the full story to “Team Nemesis”, his team of “eight samurai”, and asks for their help. They infiltrate the police’s “N-system” and identify Kan Lab’s car number plate, however, they still cannot reach Kan Lab’s headquarters. But, Kazama notices “something” left behind in the car. The fact that Kazama is more than just a useless detective, with his sharp deduction, is showing!
On the other hand, Anna and Hajime have lost “Knight’s Tour” to Tomomi, and the end of their life is drawing near. As they continue to steadily extract the large amounts of data in Anna’s necklace, Tomomi and Yamato plan their cruel way of killing off Hajime and Anna, now that they are of no use for them. However, just before completing the data extraction, Tomomi notices something. When Hajime tells her of the “devastating truth”, Tomomi is overwhelmed with anguish. Anna VS Tomomi - the pretty, like-minded geniuses’ battle takes a turn in an unimaginable direction.
This final episode brings a final end to the relationship between these men, that has been smouldering beneath the surface for 20 years. There’s a large gap between Kurita and Hajime’s strong, long-lasting friendship,  and the firm beliefs of researchers who once held the same goal in life… The flashbacks to suspense-mystery foreshadowing have all finished. However, looking back, you realise that a “tale of love” has appeared time and time again, from the first episode to the seventh.
In the centre of these love-based cases, Anna and Kazama were always present. There is of course no genetic relationship between Anna, Kazama, and Kurita. However, there’s no doubt that “Nemesis” is a family. Kazama’s deep feelings of affection inspired the “Team Nemesis” that loves Anna, and helped her to realise something that is truly important. The fact that there is no such thing as “a being that should not have been born.” (Translated from NTV offcial website.)
Tags: nemesis, sakurai sho, subbed
Subscribe
Previous
← Ctrl ← Alt
Next
Ctrl → Alt →
Previous
← Ctrl ← Alt
Next
Ctrl → Alt →