Here's episode 7! Thanks as always to

hoshizora20 who has to deal with my very strange pre-check translation style! This episode had some slightly complicated card game terminology, so I advise reading the translation notes!

Soft-subs are timed again to the web-dl raw at chesutosakurai, hard subs have now been added. Member-locking this after Nemesis is finished. Enjoy! :) 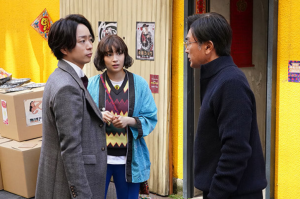 chesutosakurai
✖ Do not reupload anywhere and do not claim as your own work.
✖ Do not retranslate these subtitles without permission.
↳ Feedback is always welcomed! Please let me know if there's any issues :)
↳ Thanks to Ami for pointing out some mistakes!


Some translation notes:
[Spoiler (click to open)]
- This episode uses the Japanese card game "Hanafuda" as a main theme, specifically the game Koi-Koi. "Koi-Koi" means something like "come here" and is explained in the episode, but I advise reading more about it here if you are confused (like I was haha). I haven't translated card names as they don't translate very well directly, so you can check what they actually mean on that page too.
- "Crow" in Japanese is "Karasu," so Himura referring to Karasuma as the crow is a play on words. Karasu is also a Hanafuda term meaning a hand dealt with only one point cards, which may be linked.
- Minatomirai is a fancy waterfront area of Yokohama.
- Kazama refers to Himura as "お師匠" which means something like a teacher/master, but it felt strange to translate it like that so I've switched it at times.
Episode 7 "Lies and Betrayal" Synopsis:
[Spoiler (click to open)]
The “Nemesis Detective Agency” members that, conversely and magnificently, exposed a deplorable crime by the expose video creator Tajimin: detective assistant Mikami Anna (Hirose Suzu), self-proclaimed great detective Kazama Naoki (Sakurai Sho), and boss Kurita Kazuaki (Eguchi Yosuke). This time’s client is journalist Kanda Nagisa (Maki Yoko), who fought together with Nemesis to capture Tajimin. Kanda Nagisa is the younger sister of Kazama’s former colleague Kanda Mizuho (Maki Yoko / dual role), who died together with Mima Meiko (Yamazaki Hirona) in an accident caused by Anna’s currently missing father Hajime (Nakamura Toru).
Nagisa’s request is for them to identify the true identity of the consultant company president Karasuma (Uno Shohei), who covered up the “Mysterious Clinical Trial Death” case that Nagisa had been working on. Kurita, believing that Karasuma and the Kan Research Institute are connected, accepts the request on the basis that Nagisa doesn’t tell Anna of the incident 20 years ago, and they set out on the investigation.
Kazama immediately investigates Karasuma’s behaviour, however he finds him only ever on the phone with people, wherever he goes. Furthermore, muscular bodyguard Shiba (Itabashi Shunya) is around at all times, meaning he couldn’t get anywhere near. However, Kazama discovers that Karasuma goes to an illegal gambling den every week, and Kurita orders him to steal the data on Karasuma’s smartphone. The person Kazama turns to for help then, is a former con artist-turned-magician who he used to study under, Himura Akira (Minamino Yoko). Himura teaches them the arts of trickery and together with Anna, Kazama sneaks into the illegal gambling den, however, the evil clutches of Kan Ken quickly draw near to them there...
Kan Ken’s goal is finally revealed! And, who is the person holding Anna’s father captive? As the outline of the truth behind the incident 20 years prior is exposed, the deep bond between Kazama and Kurita unexpectedly starts to crack! Suspense kicks into gear at once, as the curtain of “Nemesis Season2” lifts! (Translated from NTV official website)
Tags: nemesis, sakurai sho, subbed
Subscribe
Previous
← Ctrl ← Alt
Next
Ctrl → Alt →
Previous
← Ctrl ← Alt
Next
Ctrl → Alt →