Here's episode 6! Huge thanks to

hoshizora20 for her hard work as always, don't forget to check out the drama she's been subbing too! I've also been helping out neet21_ on Twitter with QCing English subtitles for the drama Konto ga Hajimaru, so if you're interested check them out here!

Soft subs are timed to the web-dl raw at chesutosakurai, as always. Please enjoy :D 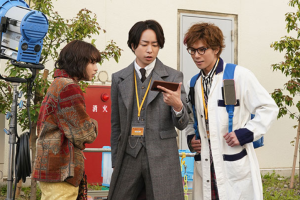 Nemesis Episode 6 - "Between Truth and Fake"

chesutosakurai
✖ Do not reupload anywhere and do not claim as your own work.
✖ Do not retranslate these subtitles without permission.
↳ Feedback is always welcomed! Please let me know if there's any issues :)
Some translation notes:
[Spoiler (click to open)]
- I haven't translated the times on the video because I felt like they were obvious, but let me know if I should add them!
- I've decided to translate the "Kan Ken" that was previously mentioned as the  "Kan Lab" now!
- Aioicho and Kohoku are real areas of Yokohama.
- "Tokyo Love Story" and "101st Marriage Proposal" are Japanese dramas both from 1991, aired in the Monday 9pm time slot known as "Getsuku," which are typically more popular dramas. Eguchi Yosuke, the actor for Kurita, was part of both these dramas (thanks to

Episode 6 "Between Truth and Fake" Synopsis:
[Spoiler (click to open)]
The “Nemesis Detective Agency” members that, while uncovering the heart-wrenching truth behind the mysterious death of Tengu Salmon’s owner, drew one step closer to the Kan Research Institute, commonly known as Kan Ken: self-proclaimed great detective Kazama Naoki (Sakurai Sho), and boss Kurita Kazuaki (Eguchi Yosuke). The two quietly put their hands together at the site of a crash caused by assistant Mikami Anna (Hirose Suzu)'s missing father Hajime, however, there they find the fresh footsteps of a woman's high heels.
And today too, a new client arrives at Nemesis. The man who comes, causing a ruckus live streaming with his video camera, is the expose video creator Tajimin, aka Tajimi Kazuyoshi (Kakizawa Hayato), who boasts a large following online. He tells the team that he wants them to search for the current popular heart throb, young actress Kuon Hikari (Yuko Mio). By the way, on this day the public is sent into an uproar, over the leak of a video depicting Tajimin and Hikari using stimulant drugs inside a car. However, according to Tajimin this is clearly a fake video.
He insists that they’re being set up by a journalist who holds resentment towards them, Kanda Nagisa (Maki Yoko), and is worried that Nagisa has taken Hikari captive. On the other hand, Kurita, after hearing the name “Kanda Nagisa,” readily accepts this request faster than ever before, although his back pain caused by the prior Tengu Salmon case has grown worse. He drives Kazama and Anna away on their investigation, but what is he secretly getting up to on his own in the meanwhile…..?
At the same time, Anna and Kazama head for the film studio with an absent Hikari, together with Tajimin. Anna is immensely curious as it’s her first time on a drama set, however, in that moment Nagisa herself appears. unexpectedly. Why does Kazama awkwardly try to hide his face… and why does Nagisa’s face drain as she sees Kazama? What is the relation between these two!?
A fake video, a missing actress, and Nagisa’s intentions come together to finally open the Pandora’s Box containing the case from 20 years ago, in this shocking 6th episode!
Tags: nemesis, sakurai sho, subbed
Subscribe
Previous
← Ctrl ← Alt
Next
Ctrl → Alt →
Previous
← Ctrl ← Alt
Next
Ctrl → Alt →