Here's episode 4 subs! I struggled a little with wording everything in this episode, since there's a lot of fast-paced speech and fancy vocabulary, but thanks again to

hoshizora20 who helped out checking over it all! She's also started subbing her own detective drama, Tantei Hoshikamo, so if you're interested go check that out in her community

Softt subs are timed to the web-dl raw at chesutosakurai! This post will be member locked after the drama has finished airing in June :) 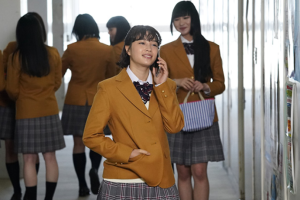 chesutosakurai
✖ Do not reupload anywhere and do not claim as your own work.
✖ Do not retranslate these subtitles without permission.
↳ Feedback is always welcomed! Please let me know if there's any issues :)
Some translation notes:
[Spoiler (click to open)]- Knight's Tour is a way of playing chess.
- The school's name comes from the French philosopher, mathematician, and scientist, René Descartes.
- Anna's comment about the way of speaking in the school refers to how, because of the prestige of the school, they're supposed to use very formal language. It doesn't translate very well into English, but when she backtracks on what she says it's in order to sound more polite.
- Joui speaks extremely fast, and although I tried to make it easier to read, the subtitles do go quite fast so I apologise!
- Socrates/Plato were Greek philosophers, and Socrates' method is a type of debating. Here's the Wikipedia article.
- "Sensei" is the Japanese honorific used to refer to teachers, and some other professions. It's used in places such as educational settings and office settings, and would be taken more seriously here given the prestige of this school. Therefore, using "san" instead of "sensei," while still polite, is quite a contrast and suggests a closer or more senior relationship.

Episode 4 - "In the Name of A.I." Synopsis:
[Spoiler (click to open)]
The “Nemesis Detective Agency,” that saved Yokohama Hakkeijima Sea Paradise from a serial bomber. In this previous case, genius assistant Mikami Anna (Hirose Suzu) took the opportunity and immediately hit it off with the genius university student, Yotsuba Tomomi (Hashimoto Kanna). Tomomi begins to visit the office often to hang out, and becomes a member of the "Team Nemesis."
And this episode's request comes from the school counsellor of an elite girls' school, Yukimura Youko (Murakawa Eri). The art teacher at her school, Kuroda Hideomi (Mizuma Ron), had fallen out of a window during lunch break, into the school yard. Her school is trying to settle it as a suicide case, but Yukimura feels that it may have actually been murder, and so requests for help from the self-proclaimed ‘great detective’ (who in reality is quite useless), Kazama Naoki (Sakurai Sho). Kurita Kazuaki (Eguchi Yosuke) tells Kazama to reject this request, but upon hearing that Yukimura’s workplace is the “Descartes Girls’ School,” he for some reason suddenly agrees to take on her request. Anna infiltrates the girl’ school as a transfer student from India, while Kazama begins his investigation with grandeur, together with police officers Taka & Yuji (Katsuji Ryo & Nakamura Aoi).
Although it's easy to see that the high school girls' treatment got Kazama hyped up, we find out that the prestigious girls' school cares more about the damage to their reputation than anything else. The strict deputy head Nanzenji Mitsue (MEGUMI) demands that the investigation be finished by 4pm. With insufficient time to conduct interviews with students and teachers, Kazama hurriedly calls for help from the genius A.I. developer who achieved global acknowledgment at only 17 years old, Himekawa Joui (Okudaira Daiken).
The former tutor Kazama’s ex-student Himekawa, although argumentative and quite eccentric, is such a handsome young man that the high school girls (completely forgetting about Kazama) fall in love! He succeeds at inferring the authenticity of every suspects’ statement through the help of A.I. and whittles it down to only 4 people. During this time, Anna goes undercover as a high school girl and hears from her classmates that Kuroda was “apparently dating the student Natsumoto Rena (Kawai Yumi).” And then, the plot takes a sudden turn...
On the other hand, Kurita secretly discovers information about the “Kan Youko” from this very girls’ school, relating to the disappearance of Anna’s father Hajime (Nakamura Toru). Kan Youko’s face is seen openly for the first time. Bit by bit, we get closer to the truth about the incident from 20 years ago, however there are also signs that someone may be getting in the way of Kurita’s actions… There’s no choice but to look forward to even more of these suspense filled developments! (Translated from official NTV website)
Tags: nemesis, sakurai sho, subbed
Subscribe
Previous
← Ctrl ← Alt
Next
Ctrl → Alt →
Previous
← Ctrl ← Alt
Next
Ctrl → Alt →