Here's Nemesis episode 3 subs! Huge thanks as usual to

hoshizora20 for all her help!

Soft subs are timed to the web-dl raw at chesutosakurai. Hard subs have now been added to this post.

This post will be open until June, after the drama finishes airing. Please join if you want to keep updated with my subs! And enjoy :) 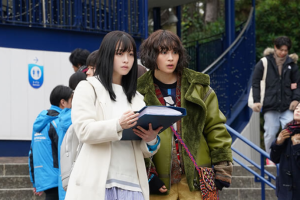 chesutosakurai
✖ Do not reupload anywhere and do not claim as your own work.
✖ Do not retranslate these subtitles without permission.
↳ Feedback is always welcomed! Please let me know if there's any issues :)

Some translation notes:
[Spoiler (click to open)]
- Throughout the whole of Nemesis, the word 犯人 (meaning culprit/criminal/offender) is used to refer to whoever is responsible for the crime that episode. However, it's not used exactly the same in Japanese as in English, and I haven't been able to come up with a more fitting translation.
- Atman is the name of one's true soul, within Hinduism.
- Hakkeijima Sea Paradise is a real theme park located in Yokohama. Yokohama is in Kanagawa prefecture.
- Sea-ta is the name of the statue, Sea Paradise's mascot.
- 200 million yen is roughly equivalent to 2 millon dollars.
- I'm bad at maths so here's Wikipedia's explanation for the Helmholtz equation if you're curious.
- Rinrin and Kaoru use the Chinese word for good bye and no problem, respectively. Whether this has any significance, I don't know.
- きゅんです (Kazama's line at the end of the episode) is a trendy saying that generally goes along with doing a finger heart.

Nemesis Episode 3 - "Beauties, Bombs, and Theme Parks" Synopsis:
[Spoiler (click to open)]
The “Nemesis Detective Agency” that miraculously cleared up young aspiring rapper Itsuki (Kubozuka Airu)’s false charges. Although you’d think they’re extremely busy, having worked on multiple cases… boss Kurita Kazuaki (Eguchi Yosuke) and assistant Mikami Anna (Hirose Suzu) are found relaxing on the rooftop and entertaining themselves with Kalaripayattu practice. In addition, there’s the clumsy detective Kazama Naoki (Sakurai Sho), who tells the obvious lie of “Ahh, I feel so ill (cough cough)” and goes home early. Suspecting something is up, Anna and Kurita follow Kazama, only to find him enjoying a date at Yokohama Hakkeijima Sea Paradise with the familiar member of “Team Nemesis” Kiiko (Oshima Yuko)!?
Despite Kurita trembling with rage, he ends up getting caught in the middle of Sea Paradise’s unprecedented crisis! A serial bomber going by the name of the “Bomber” set up a series of bombs, and was demanding money, “I’ve planted bombs. Get me 2 billion yen by tomorrow.” The 10,000 visitors having fun inside the park get taken hostage and at a loss for what to do, the park manager … (Asano Kazuyuki), calls up his old friend Kazama and asks for help, knowing that Kazama had solved the “play boy of Isogo murder case” as well.
Kurita removes Anna from the investigation, stating it’s too dangerous for her this time. Although feeling discouraged, Anna fatefully encounters the pretty science student, Yotsuba Tomomi (Hashimoto Kanna) and they hit it off immediately. As a matter of fact, this Tomomi is actually a super science student with the genius brains to rival Anna’s! Does this Tomomi really just fall in love with Kazama at first sight!?
Setting that aside, the multifaceted “Bomber” lays out ingenious traps to play around with Nemesis and the police. Kurita and Taka & Yuji (Katsuji Ryo & Nakamura Aoi) get caught up in those traps, being stuck on a bus hooked up with a bomb! Can the genius pair Anna and Tomomi get them out of this desperate situation!? During all this, what’s the clumsy detective Kazama getting up to…..?
And how on Earth does this seemingly unrelated serial bombing case connect to Hajime (Nakamura Toru), Anna’s missing father…..? Make sure to keep a close eye on all the unpredictable developments still to come!
Tags: nemesis, sakurai sho, subbed
Subscribe
Previous
← Ctrl ← Alt
Next
Ctrl → Alt →
Previous
← Ctrl ← Alt
Next
Ctrl → Alt →