Reposting this because I'm stupid and somehow managed to delete the original post! Anyway here's English subs for Nemesis episode one! And thanks to

hoshizora20 for making it possible!

Soft subtitles are timed to the web-dl raw at chesutosakurai, however either raw should work.

This post will be member-locked when Nemesis finishes airing. Please join to keep updated with the subs :) 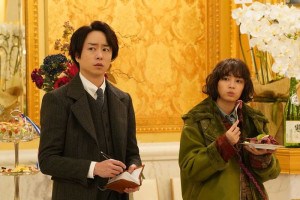 ✖ Do not reupload anywhere and do not claim as your own work.
✖ Do not retranslate these subtitles without permission.
↳ Feedback is always welcomed! Let me know if there's any issues :)
↳ Huge thanks to Fuyu + Ami for giving me useful feedback/corrections!

[Spoiler (click to open)]- Isogo is a ward in Yokohama, where this episode is set.
- One billion yen is roughly equivalent to 10 million dollars, 10 billion yen is around 100 million dollars.
- The 6 lovers and Kiiko's names reference the colours that they're wearing.
- Enka is a Japanese music genre resembling traditional Japanese music.
- The code in Japanese states that the will is hidden by something that doesn't have a line in its heart. The Japanese word for heart is "kokoro" (心) but the English word for heart is also used, "ハート." When you remove the line in the middle, you get the Japanese word for a pigeon/dove, "ハト." This is the solution for the riddle.

[Spoiler (click to open)]“Nemesis Detective Agency”. The three members of this agency, located on the second floor of a run-down Yokohama building, are the talented assistant who leads them to the case’s solution in an instant, Mikami Anna (Hirose Suzu); the seemingly capable man who is, in reality, a fairly unreliable detective, Kazama Naoki (Sakurai Sho); and Nemesis’ company president and veteran detective with other 30 years’ experience, Kurita Kazuaki (Eguchi Yosuke).

This company Nemesis’ first job is pictured in the series’ first episode. The first client for them to celebrate is the pretty doctor, Uehara Kiiko (Oshima Yuko). With her only reason for choosing them being “when I googled they were the first result,” the request Kiiko brings to Nemesis is as follows: the billionaire, and her own employer, “play boy of Isogo” Shibusawa Hokiichi (Ibu Masato)’s 80th birthday party is taking place that night. However, they were sent intimidating blackmail that says "If you don't cancel the party, his life will be in danger"! And it seems he wrote in his will that he is splitting his vast inheritance between his six lovers… as expected of a play boy!

The Nemesis team accept their first request, and eagerly make their way to Hokiichi’s stately mansion. Kurita turns a sour face towards the well-liked Hokiichi, with his collection of six pretty girlfriends. However, Hokiichi’s corpse is discovered within his “bedroom that became a locked room” the day after the party! The suspects are the seven pretty women who lack an alibi, client Kiiko included. And every one of them has the incentive to kill him…

Can the genius detective Anna and the unreliable detective Kazama, taking this on as their very first investigation, solve this difficult case!? Also shown is the intriguing “flashback to 20 years ago” and “Anna’s Father (Nakamura Toru)’s figure.” Every case will, eventually, lead to one truth. (Translated from NTV official website.)