Here's the subtitles for episode two! Once again thanks to

hoshizora20 for helping, as well as

Subtitles are timed to the web-dl raw at chesutosakurai however either raw should work, as before.
I've decided to keep all Nemesis subs open until when Nemesis finishes airing, so no need to join unless you want to keep updated! Please enjoy :) 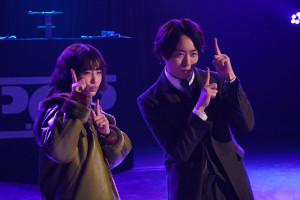 chesutosakurai
✖ Do not reupload anywhere and do not claim as your own work.
✖ Do not retranslate these subtitles without permission.
↳ Feedback is always welcomed! Please let me know if there's any issues :)
Some translation notes:
[Spoiler (click to open)]
- According to the Nemesis chart here, "Kan Ken" is an abbreviation for the Kan Research Institute (菅研究所), run by Kan Youko. I've kept this simply romanized as it's technically still a mystery in the drama.
- A "cypher" is a rap term, meaning a type of freestyle rapping where everyone gets together in a group (as seen in the episode).
- Crystal Lake is a fictional town from the film series Friday the Thirteenth.
- Remittance fraud, more well known as bank transfer scams, is where someone is convinced to send money to a scammer, usually someone pretending to be a good will charity, organization, etc.
- Kalaripayattu is an Indian martial art.
- What I've translated as "the 3 Ds" is actually a concept in Japanese called the three Ks, usually relating to people who work manual labor. It's originally "dirty, dangerous and demanding" (きつい・汚い・危険) but Kazama uses "can't go home" (帰れない) instead of dirty.
Episode 2 - "Hip-Hop After Tears" Synopsis:
[Spoiler (click to open)]
The “Nemesis Detective Agency” that suddenly rose to fame after incredibly solving the “play boy of Isogo murder case.” People flock endlessly from all over the country to the company of genius assistant Mikami Anna (Hirose Suzu), clumsy detective Kazama Naoki (Sakurai Sho), and company president Kurita Kazuaki (Eguchi Yosuke), leaving Kazama extremely pleased with himself. During this, a sweet middle school student, Kamiya Setsuko (Tamaki Sora), comes knocking shyly on their door.

Her only brother, raised with her in the “Akaboshi Orphanage,” called Kamiya Itsuki (Kubozuka Airu), went missing 2 weeks prior and she asks them to find out where he is. The three of them quickly trace Itsuki’s trail to the club “P.O.P” that aspiring rapper Itsuki frequents! There, they meet kind and friendly rappers. For some reason, Anna takes upon the task of performing her own impromptu rap in front of the owner Akutsu (Watanabe Daichi) and staff member Kijima (Hannya)!? However, there they find out the truth that Itsuki had gotten involved with an atrocious group guilty of bank-transfer fraud (or what’s known as remittance fraud)! Can Nemesis find Itsuki safely?
In addition to episode one’s client Kiiko (Oshima Yuko) joining the team and helping with their investigation, someone who seems to have a long history with Kazama, Hoshi Kensho (Ueda Tatsuya) also joins the show. Excitement grows as team Nemesis’ circle increases one by one!
However, why did the constantly bankrupt Kurita accept such a request, that would not turn any profit? It seems it probably has something to do with the “case from 20 years ago, the mystery of Anna’s father Hajime (Nakamura Tooru)’s disappearance”..... And in a sudden flashback, Hajime’s former colleague Kanda Mizuho (Maki Yoko) and the mystery woman Meiko (Yamazaki Hirona) are seen being trailed by someone in a car… the mystery deepens further in this suspense-filled development! (Translated from NTV official website.)
Tags: nemesis, sakurai sho, subbed
Subscribe
Previous
← Ctrl ← Alt
Next
Ctrl → Alt →
Previous
← Ctrl ← Alt
Next
Ctrl → Alt →