I do these pretty often, so I may upload some more if I can get my hands on the scans. Whole thing below~ 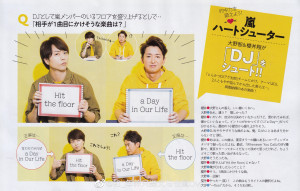 Ohno and Sakurai do a DJ shoot!!
The Tonkatsu DJ Agetarou team has given them the theme of 'DJ'. The answers they gave after worrying about it were... both the correct songs!
Q: As a DJ, what would the Arashi member use to hype the floor...
What's the first song the other person would put on?

Sho: Hit The Floor
Ohno: a Day in Our Life
Sho: Ohno's answer is pretty much correct~.
Ohno: Oh, is it something else? But I was almost there?
Sho: No, I haven't really chosen mine but now that you mention it, I think that's definitely a good choice. You can immediately tell it's a Day in Our Life from when the intro starts, so it'd really raise the floor from the very first bar.
Ohno: It seems like an easy song to DJ with. But, I don't know much about DJ-ing (laughs).
Sho: Haha, we recorded this song in a recording studio next to Tokyo Tower. When we recorded the Whenever You Call MV recently, I thought Tokyo Tower was really pretty again but I do remember singing there.
Ohno: Yeah, it was like that.
Sho: Isn't yours Hit The Floor?
Ohno: The song I'd use for DJ-ing?
Sho: Yeah. The first song you'd put on.
Ohno: ... you are correct!
Sho: Woohoo! The song title already won, didn't it~
Ohno: It did, because it's "~ floor" (laughs). Sho: Hearing that DJ Koo-san's wife is a fan of Arashi made me really happy.
Ohno: Right.
Sho: We've met so many times before but I didn't know about it at all. All throughout middle school, high school, and my youth I would pass time by listening to TRF's music, so it made me really happy.

— Ohno-san was this episode's cliff climber.

Ohno: Haha, well I've been getting worse at it recently (laughs).
Sho: I thought it was your strong point?
Ohno: Nope, my body seems to really hate doing it.

— How was the special planning for "Oto Arashi"?

Ohno: It was horrible too. I couldn't hear anything (laughs). The songs weren't even very detailed that far in.
Sho: Hahaha

— Sakurai-san and Ohno-san happened to be continuously too slow compared, to the answers Matsumoto-san gave.

Sho: That's because he's an all-round master (laughs).
Ohno: I just tried to play along too, because I didn't know the songs.
Sho: Hahaha

— By the way, Ohno-san's solo exhibition "Freestyle 2020 Ohno Satoshi Exhibition" is currently being held. It comprises of a culmination of his work up until this point.

Sho: It left a really deep impression on me. It was full of the history of Ohno-san's work.
Ohno: Thank you.
Sho: I've always been able to see your work up close since the very first solo exhibition, but when I see that many works before me I can't help thinking how amazingly talented he is.
Ohno: The staff [at the exhibition] are amazing. I just think of something for my art and paint it. I must thank them soon for telling me the best way to captivate people.
Sho: The work from before you entered Johnny's and the stuff from when you were a kid were really moving.
Ohno: It was still there when I visited my parent's home, and I thought it would be fun to collect some of them too, so I just brought it with me (laughs).